SOMETHING FOR THE WEEKEND + HAIR BALLS AND STICKY PAWS vs. FUZZY HUGS AND KITTY KISSES: 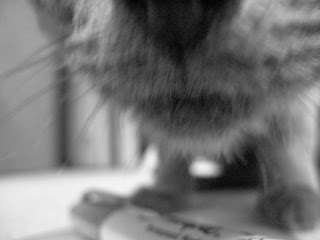 After dark, all cats are leopards - African proverb


NOODLES THOUGHT FOR THE DAY:
" Thumbs, if only I had thumbs. I could get into  a lot more trouble."

A great big sticky paw right on the head to our elected officials in Washington. If you don't do the  work you shouldn't get paid... you know like the rest of us!

A kitty kiss to the Capital Police and other personnel for doing their jobs yesterday even though they might not get paid due to the shut down those they were there to protect initiated.

A sticky paw to the local library and book stores for the tiny, tiny sections on cats! There are dozens of dog books and magazines! Come on cat people, time to saturate the market on behalf of cats! Whose with me?


AND NOW SOMETHING ABOUT PARIS... 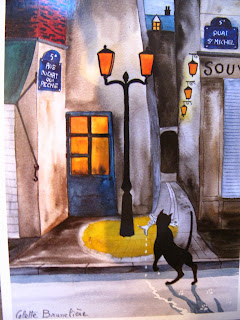 In Paris there is a tiny street named Rue du chat qui peche or Street of the fishing cat. It is the narrowest street in the city. It can be hard to find unless you find not the street itself but it's depiction in a painting on a post card or in a book. I will give you a hint, it is in the Latin Quarter...
Although we have photographs of the street, this post card is so beautifully done I thought it conveyed the scene much better.