Our Very First Sticky Paws and Hairballs vs. Kitty Kisses and Fuzzy Hugs of 2016! 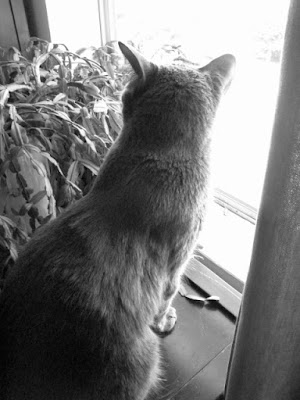 (okay...who put this plant in my window?)


First up; a big Kitty Kiss  to a local doctor for bringing attention to and making people aware that the water in Flint, Michigan had become toxic.
Dr. Mona Hanna-Attisha, first decided to check lead levels in children after reports that the water was discolored and smelled and tasted bad.
This was after a City Manager was put in place by the governor who then took charge over the officials elected by the people of Flint. The City Manager decided to save money by switching the drinking water which was brought in from the Great Lakes to water from the local river.
Now there is a state of emergency and thousands of residents have been poisoned by toxic levels of lead; http://www.npr.org/2015/09/29/444497051/high-lead-levels-in-michigan-kids-after-city-switches-water-source

A great big super duper Fuzzy Hug to Prez Obama and Secretary of State John Kerry for using words to make the world a safer place! Today the historic Iran nuclear deal went into place AND to every ones surprise American hostages were released too...
For more info on this historic deal check out our post from September 13, 2015;
http://herecomesnoodle.blogspot.com/2015/09/this-weeks-sticky-paws-hairballs-fuzzy.html

Next up, a large Sticky Paw goes to Chris Christie's mouth.
Not only does Mr. Christie act like a two year old bully but someone needs to tell him there is no place on the world stage for talking smack about the president of the United States no matter who it is!
http://time.com/4182070/republican-debate-christie-rear-end/
And if talking like a bully in a school yard weren't bad enough...
http://www.slate.com/blogs/the_slatest/2016/01/15/chris_christie_s_debate_strategy_interrupt.html
for the later we give him a great big hairball!

Next up a big hairball for Donald Trump.
All these months he's been acting all sweet and cozy with Ted Cruz but then this week the gloves came off and he hit Teddy with "maybe you can't be president...". Look we are not in any way fans of Ted Cruz but that's just as low a blow as when The Donald started with his birther talk about the president. It's a little old by now and it's not attractive Donny!
http://www.usnews.com/opinion/blogs/robert-schlesinger/articles/2016-01-07/donald-trump-succeeds-in-mainstreaming-birther-questions-about-ted-cruz

(We are awaiting tonight's democratic debate and will report accordingly.)

And that brings us to squirrels!
For those of you who love cake AND squirrels, a big Fuzzy Hug to squirrel cake...
yep, we found a recipe for Squirrel Cake, really...
http://www.adventures-in-cooking.com/2012/07/squirrel-cake-aka-nutty-german.html

And as long as we are talking about squirrels how about a funny squirrel video?
https://www.youtube.com/watch?v=4yikpWtIFU8

Well that's it for now...
Have a wonderful weekend!