If you haven't been thinking about the presidential race coming up in 2020,
I have two very important words for you; the electoral college.

The past two Republican presidents were both "elected" by the electoral college and NOT the popular vote!

There have only been 5 presidents who have won the office without the popular vote.

The republican party has been working quietly behind the scenes for years gerrymandering districts in favor of the Republicans.

And still Donald Trump is president.

That is what the electoral college can do...

And on a more positive note...
we offer you a moment in time when no one was thinking Make America Great Again. We all thought this America was pretty darn great.

We are taking part in The Cat On My Head blog hop! 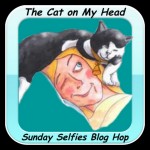